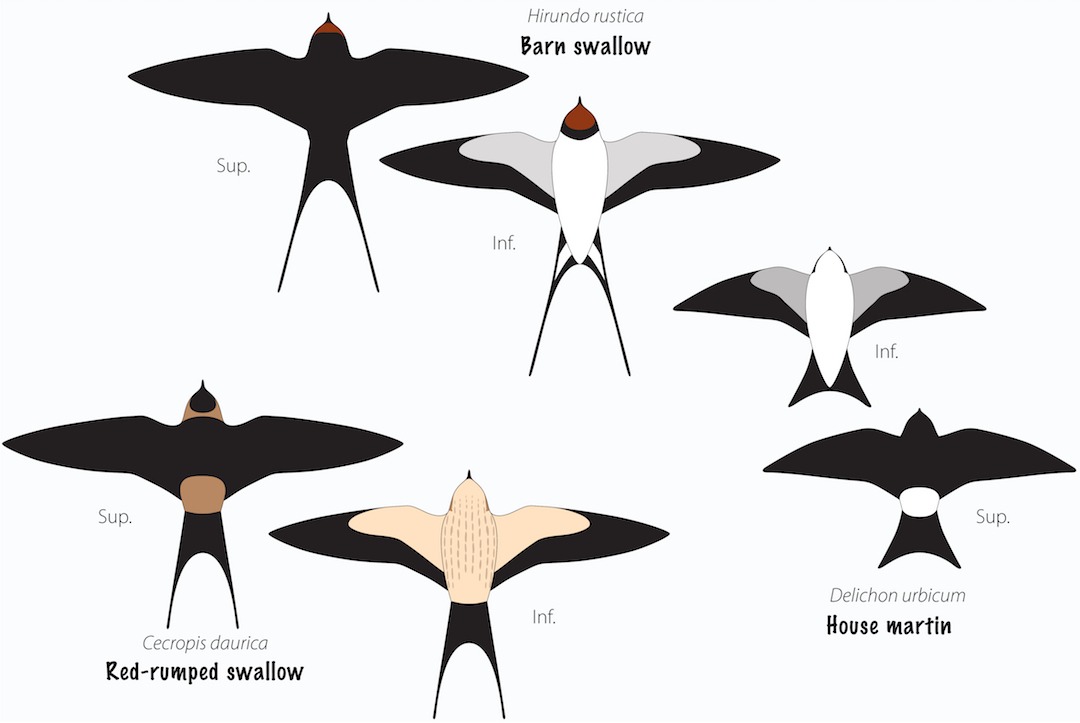 Now that Summer is almost here I’m sure you have noticed that the greatest air acrobats have come to our cities, villages and fields: the swallows.

These birds are expert insect hunters, some of them as annoying as flies and mosquitoes. In fact, they could hunt up tp 150g insects per day, which means around 55kg per year! We think this is more than enough to help for the preservations of these species. What’s more, it is always funny to watch them and enjoy their pirouettes in the air. Don’t you think so?

But… not all the “swallows” we see belong to the same species. We have nine species in the Iberian Peninsula (plus another one in the Canary Islands) spread in three groups: martins, swallows and swifts.

They resemble each other in many ways, all of them are fast and fond of pirouettes, they have similar habits for nesting and they visit us only whith good weather: they arrive in spring and leave at the end of summer. Only the crag martin lives in the peninsula throughout the year.

Let’s see how to tell them apart from each other, helped by Marco Nunes Correia illustrations and a J.A. Sencianes Ortega watercolour.

Its scientific name is related to the places where they build their nests: rocky walls, bridges, dams.

Description: it is ash-brown above and paler brown on the underparts, except for a dark stripe on the wings. The tail is short and square and, when it is open, shows white patches near the tip of the feathers.

Nests: are open half cups built with mud and lined with feathers or other soft material. They usually nest alone.

It is the smallest martin in the Iberian Peninsula.

Description: just like the crag martin, it is evenly ash-brown on the upperparts. However, is white on the underparts except for a brown band on the breast. The tail is slightly forked and has no white patches.

Nests: in contrast to all other species, these are not muddy nests but galleries dug in earth banks.

It is, by far, the most abundant species of those we are talking about. It owes its scientific name to its regular presence into the cities.

Description: it is steel-blue on the upper side except for the rump (right above the tail), which is white. The underparts are completely white as well. The black tail is not as forked as in other species.

Nests: they hang their nests on house eaves, bridges, dams, etc; nests are built with mud and they are cup-shaped, with a narrow opening at the top. They frequently breed colonially.

It is the biggest swallow in the peninsula and also the most common.

Description: the most distinctive trait is the red patch from the forehead to the throat. The upperparts are steel-blue and the underparts are off-white or reddish (males and some females) or white (females) excepting a dark blue breast collar. The tail is deeply forked with the outer feathers very thin and elongated. It is completely black with some white spots in the central sections of its feathers.

Nests: are half cups built with mud and are hung on buildings eaves or between barn beams.

It is similar in appearence to the barn swallow but prefers open and rocky spaces.

Description: although it resembles barn swallows, with dark upperparts, it has a white and reddish rump. The red patch on its head goes to the back of the neck, leaving a white throat and a steel-blue cap. It has off-white underparts and the tail is black, without white spots.

Nests: made with mud, they are half-bottle-shapped and they are placed under bridges or into building ruins.

Finally, let’s talk about swifts, known for their wide wingspan (lenght between the wing tips once they are spread out).

The scientific genus name, Apus, is from the ancient Greek “apous” (footless), given their small legs and their highly aerial life style.

One of the most peculiar traits of these birds is they spend most of their lives in the air, flying. They only take land to lay eggs, incubate them and breed the offspring.

Is the most frequent swift species in the peninsula.

Description: it is completely dark but for the throat, which is paler. The tail is forked and the wings are long, thin and pointed, giving it a sickle-shape.

Nests: they are placed into holes and crevices both from rocky places and buildings.

It resembles common swift so much that sometimes is hard to tell them apart.

Description: even though it has dark colouring, is paler than common swift’s and the white patch on the throat is wider. Wings are shorter and blunter. The tail is also shorter and not so forked.

Nests: they are placed in cliffs but also in eaves or bridges.

It is the largest swift species in the peninsula, with more than 50 cm wingspand, and the one with slowest flight speed.

Description: it is dark brown above and a dark brown collar separates the white underparts. The wings are long and thin and the tail is slightly forked.

Nests: they are built into holes and rock crevices as well as in old buildings.

Besides being the smallest swift, is a rare species in the peninsula. Not present in Asturias.

Description: it is completely dark except for the white throat and the white rump. Wings have a narrow white band on the tip of the feathers closer to the body (secondaries).

Nests: it seizes red-rumped swallows nests and decorates the entrance with white feathers.

To conclude, let’s mention the plain swift (Apus unicolor), a regular species on the Canary Islands. Despite the resemblances to the common swift, it is smaller than this one and it has uniform dark brown plumage and a pale throat.

Have you seen any of these species where you live? And in the field? Which one do you like the most?