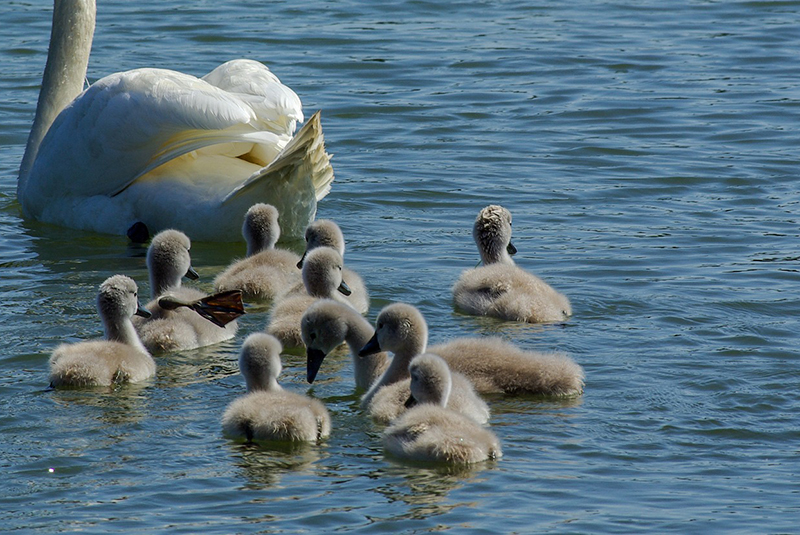 Swan with its chicks

There is a proverb in Asturias that says “Marzo ñerarzo, Abril hueveril y Mayo pajarayo”, which means “in March nests, in April eggs and May chicks”. (Please notice that ñerarzo, hueveril and pajarayo are words from the Asturian dialect)

Well, it is totally untrue: around here, birds are in a non-stop “brooding mode”. It is true that this winter has been very mild and this has provided the female birds coming earlier into heat, as well as with nests and broods. Moreover, we are in June and we have seen the second covey of mallards which, by the way, have a hard time keeping together their offspring.

Some of them live in the Güeña River, in its way through Cangas de Onís, given that the river is channeled. But they love to sniff around, even though they have to cross the road nearby as best they can. A few weeks ago we had to stop the transit trying to gather together a mallard family. We were afraid of them being run over and turned into sliced duck. What a beautiful scene we made, running after six little ducks… hopefully there was anybody filmming! I don’t know why people call “duck” to someone clumsy (at least in Spain)… what a way to run!

Finally, we got the family gathered and we were talking proudly about our efforts with an old woman who had been watching us, when suddenly she drove us to ruin: “this morning she had ten or twelve chicks, I don’t know where they could be”. The only thing we could think about, with our hearts still pounding, was hoping they had managed to reach the river. It so happens that we did not see them anymore, so our legs were extremely grateful…

Besides mallards, we have pinpointed a white-throated dipper’s nest. They are said to be bioindicators who only inhabit rivers with high quality waters. And this river has them, no doubt, since they are frequently seen. This pair of dipper have raised the second brood of bioindicators and they are alredy looking for accomodation.

But barn swallows are the most remarkable case. In front of our home there is a stable, with its cows and all that stuff. The owner sais that they are able to raise three broods in good years and this is what happened this year: we’ve seen some swallows incubating the third clutch. They make the most of the heat inside the cowshed as well as of the food that cows provide them: an insectivourous diet just right next to their nests. With such attractions they can not say “no”.

At the beginnig of the Spring you could see a few swallows but now they are everywhere. They fly at full speed, some of them learning to avoid obstacles and to take flying insects on the wing. At this rate, they will eat all the flies and mosquitoes in the area… good neighbours!!

Ecotourism in the Sella River descent

New edition of the introductory course to ornithology in Bejes